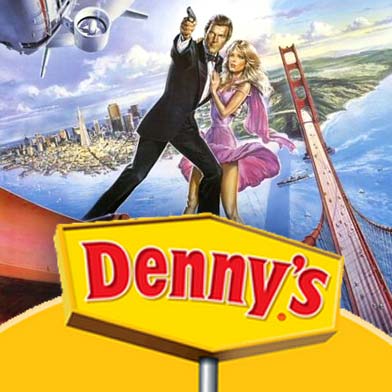 The Appeal has confirmed that both San Francisco Denny’s restaurant locations (mapped below) will be participating in their (PDF) free “Original” Grand Slam Breakfast on Tuesday, February 9, between 6 AM to 2 PM.

Ha! Did you hear how newsy I just pretended to be when talking about a free breakfast? But seriously, sometimes locations of places don’t play along, and we wanted to make sure before we sent you out there. So we called, and they both said “yes.”

According to the Denny’s employee I spoke to at the Mission location, the “Original Grand Slam Breakfast” (reportedly clocking in at 795 calories, if you’re counting) consists of 2 eggs (cooked to your specification), 2 sausages, 2 bacon strips, and 2 pancakes.

It’s up to you on if the time you might have to spend in line (lines in some locations during this promotion in 2009 took an hour, plus to make it through) is worth that meal. If you go, let us know how it is!