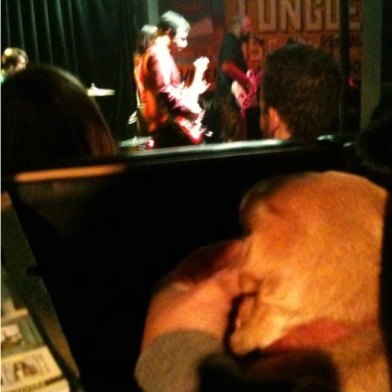 Due to some logistical errors, the Appeal will be covering this week’s NoisePop festival as civilians rather than members of the Press. So, in the spirit of community, we’re bringing you the highlights from across the San Fran-osphere that you might have missed if you’re not an obsessive show hopper.

Tuesday night: The festival kicked off across the Bay at the Fox Theater, where (appropriately enough) the gang from The Bay Bridged caught Yoko Ono screeching a bit too much over the computer-rock of the Plastic Ono Band. From the sounds of things, indie/J-pop darlings Deerhoof found themselves in a unique position as a perfect fit for Yoko’s audience, but perhaps not pushing their sound to the limits of the sometimes cavernous Fox Theater. Concert Photographer Charlie Homo’s photos of the lead-in documentary are the highlight. Is that John Lennon’s hairy ass? More photos on SFWeekly.

Wednesday Night: The festival really gets in to full swing once you have to start making decisions about which show you really want to see. While the headlining acts might be a great draw for more casual concert-goers, the hardcore pass holders will make it to no less than three venues and that doesn’t even include the Happy Hour events. Speaking of which, like last year the happy hour venue of choice seems to be Benders, where Wednesday night internet radio station SomaFM and San Francisco bar staple Fernet Branca sponsored a Happy Hour with up-and-comers: The Ian Fays and Mist and Mast. Oh and someone brought their dog, which maybe they shouldn’t have.

After happy hour, it’s a free-for-all. Next closest venue to Benders was Bottom of the Hill, where Oakland’s Man/Miracle and the husband & wife team of Two Sheds provided lead-in for Rogue Wave. The electro-pop veterans from Oakland previewed a couple tracks off their latest album Permalight which will see the light of day next Tuesday with a little help from the nicest guy in indie rock (and another local favorite) John Vanderslice. The Bay Bridged has the photos.

Meanwhile, across town at The Independent on Divisadero, Kevin from Hello Vegetables caught Sean Lennon and his model-girlfriend performing their “poppy, psychedelic tunes” as Ghost of a Sabre Toothed Tiger. The lineup at the Indy was something of a grab bag of musicians from Yoko’s set the night before: Opening support was provided by Lennon’s own side project with Deerhoof’s Greg Saunier: Consortium Musicum and the surprisingly lovely Petra Haden/Yuka Honda collaboration: If By Yes.

Down on Upper Market, popular internet web log Gorilla vs. Bear sponsored a strong lineup of: Young Prisms, The Sandwitches, Best Coast, and Harlem: four buzz-worthy bands that played to a crowd of music bloggers and local scene kids who mostly seemed to be there for Best Coast‘s fuzzy, sunny lo-fi pop. Think of them as Girls, but with an actual girl. (I am clearly not the first person to make that analogy.) GvB has photos with more on The Bay Bridged.

Finally, if you’re looking to get in on the action yourself, check out a Procrastinator’s Guide to Noise Pop over on Epicsauce, where Kevin will point you to what isn’t sold out, but always worthy of a listen. And if you’re just in it for free shows and drink specials your best bet is Broke Ass Stuart’s Proper List of NoisePop Free Events.

Alright, did I miss anything? Leave any of your personal music-blogger rantings in the comments.