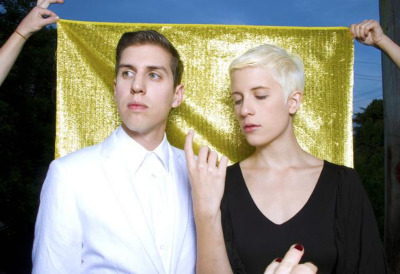 So it’s February, the 15th of – BUT I have a mental retreat for you! Think back to the afternoon of May 26th. God knows what you did, but me – there was a heat wave in Berkeley; I sat in my hot filthy co-op, my shirtless back stuck to my chair, and I heard for the first time YACHT‘s “Psychic City (Voodoo City),” and it went

thereby spelling out all of my secret hopes and belief in the potential awesomeness that the summer, stretched out before me, possessed.

Now it’s February 15th, and YACHT just released an iTunes session, performed with a full band, in which they reinterpret “Psychic City” and 3 other songs, including a Weezer selection. Considering that much of YACHT’s appeal lies in their laptop wizardry, this totally had the potential to suck.

Of course, it doesn’t. YACHT translate their electro/cult/pop into oldschool/cult/pop just as seamlessly as they fashioned Rich Jensen’s “tone poetry” (from which “Psychic City’s” lyrics and grunts were taken) into a poolside summer jam.

Check out their rendition of the Weezer classic “Holiday” here on Pitchfork! If you reserve a place in your heart for both Weezer and Tom Tom Club, you’re going to absolutely love this. Also, YACHT are going on tour with their live band – no SF dates yet, but it would be pretty fucked if they skipped the bay so keep an eye out!