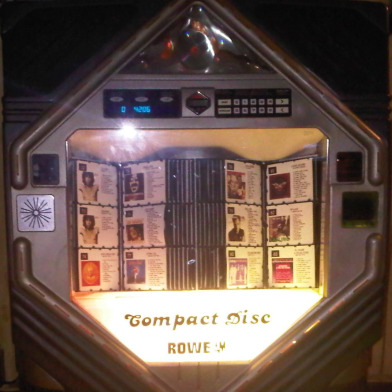 When I go Jukeboxin’, I sometimes think I’m trying to recreate the feelings I had as a teenager in love at Huey’s Diner, ordering a shared plate of grilled cheese, fries, and a cherry coke while sitting in the retro booths and playing the working tableside jukeboxes. My favorites were Jackie Wilson’s “Higher and Higher”, Otis’ “Sittin’ on the Dock of the Bay” , and “The Book of Love.”

The Gold Cane isn’t anything like Huey’s, except they have “Duke of Earle” by Gene Chandler, and large windows. And on the warm, sunny day I visited, I already had that fuzzy “omg it’s spring – I love everyone” feeling, and then I found a great Juke, which made my day even better. I also made sure not to look down, as their floors are made of carpet. Barf.

They have a very large, well-rounded selection: heavy on the Stones and a good sampling of soul: Aretha Franklin, Otis Redding, Marvin Gaye, James Brown, The Ronettes. Also the 1970’s, skinny jean and leather jacket smelly guy selections: Television, Clash, Pogues, Bowie, and the Damned. Throw in a little 90’s alt like Bikini Kill and The Pixies, and you have a pretty good mix-list.

If I were on Yelp, I would say “minus one star because they have the Grateful Dead”. No one with good taste would play Grateful Dead – especially at a bar. Sorry but it’s true. But the fun I had while flipping through was a little like the fun I had at Huey’s.

Where: Gold Cane (1569 Haight Street @ Clayton)
Good for: Sunny afternoon drinking with good music you probably won’t play because it’s too early for that
Bad for: People who don’t go to the Haight because it’s too touristy, or people who hate carpeted bars
Cost: 3 plays $1, 7 plays $2, 18 plays $5