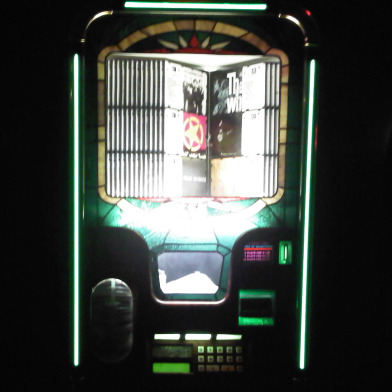 Did you know Bloodhound has a jukebox? I didn’t either. You can’t really see it in the back because of the permanent barricade of Bridge & Tunnelers, who like to stand in between the large rustic bar tables and the bar.

Why am I describing my lust for Peja instead of talking about the subject of this column? Because this jukebox is so boring that a basketball game on mute is more exciting.

Not only does the jukebox stick out in the Frontierland setting, with its flashy green bars and chrome exterior – its impossible to get to it through the crowd. While you’re navigating your shitty beer jar and saying “excuse me” nicely, because B&T’s are feisty when they drink, you’re also trying not to slip on their spilled drinks. Why can’t you just sit the fuck down?

So I navigate through the masses, unload my shit on the crate that’s next to the ATM which is next to the juke, which is in a hallway on the way to the bathroom. And then I stand and sigh.

I didn’t play a single tune, I didn’t even see how much it cost. I downed my Liberty as fast as possible, put on The Adicts on my iPod and walked to BART. This was the most exciting part of my trip.

Good for: Not playing music; people who get really drunk and spill their drinks and lose their cellphones.