Hell on Two Wheels: Is Cycling *Really* Getting More Dangerous? 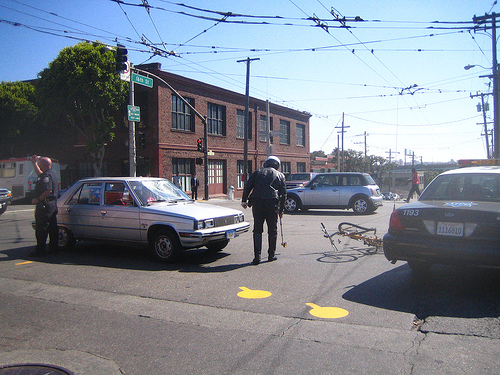 While aimlessly hunting around the local blogosphere shortly after my last column, I noted a post on The Oakbook titled “Oakland Bicycle Accidents on the Rise.”

My first thought was, “Really? How could a driver miss a kid on a scraper bike?” My second thought was, “Crap, this may add fuel to the perception that urban cycling is dangerous.” And perception leads to policy — apparently most Americans are convinced that crime is on the rise, even though, in fact, it’s at record lows.

As we all know, helmets are for pussies. Pussies who are still alive.Oakbook’s numbers are from a report by the RAND Corporation (not exactly a bunch of tree-hugging hippies), which says that between 2000 and 2008, reported accidents went up 29 percent in San Francisco, from 364 to 471. It’s important to note “reported,” since every other study on bicycle safety I found agreed that bicycle accidents and injuries are underreported. The increase is worse for Berkeley (37 percent) and Oakland (38 percent). However, only one cyclist died in Berkeley over that span, while 10 died in Oakland and 19 in San Francisco.

But is cycling in San Francisco and the Bay Area getting more dangerous? I would say no. The numbers suggest that, in fact, it’s getting safer. Why? Because increases in ridership are outpacing increases in accidents. Between 2006 and 2009, the number of riders counted at various points around the city by the Municipal Transportation Agency [PDF] went up by 61.4 percent, more than double the increase in reported accidents between 2000 and 2008.

That isn’t the most direct comparison, but if you compare the relative rise in accidents just between 2006 and 2008 with SFMTA data from that period [PDF], ridership number increases outpace reported accident increases.

And it’s in line with national trends. Bicycling has actually gotten markedly safer, or at least less potentially lethal, fairly steadily since 1975 according to the Insurance Institute for Highway Safety, particularly for women, where the fatality rate has been reduced by nearly half. Why the disparity? Probably helmets. Out of 696 total bicycle fatalities in the United States, 88 percent were of riders not wearing a helmet. And as we all know, helmets are for pussies. Pussies who are still alive.

The decline is also likely due to increased access to bike lanes and paths, one of the RAND’s suggestions for reducing urban traffic congestion.

Hybrids were 50 percent more likely to be involved in accidents with cyclists and pedestriansAccording to the National Highway Traffic Safety Administration’s National Survey of Bicyclist and Pedestrian Attitudes and Behavior [PDF], the number one thing that Americans feel threatened by when cycling is cars, and by a wide margin. Maybe not surprisingly, it’s suburbanites who are the most scared, with 17 percent reporting feeling threatened when riding compared to 13 percent for urban cyclists and only 9 percent for rural cyclists.

So, yes, reported accidents have gone up in San Francisco in the last decade. But ridership has grown even faster. And, no pun intended, it’s a virtuous cycle. Because while I don’t have numbers to back it up, my impression is that people who cycle even occasionally in the city make for much better drivers, at least where it concerns other cyclists.

My dad, who was nearly killed in a cycling accident when commuting to work a few years ago, has a “Give Cyclists Three Feet” bumper sticker on the family car, for instance. And before you take that example as proof cycling is dangerous, he was also nearly killed while driving a tractor-trailer shortly before I was born. He still cycles regularly.

As for motoring enthusiasts who feel that their hybrid or electric car is better for the environment? Another study by the NHTSA [PDF] found that hybrids were 50 percent more likely to be involved in accidents with cyclists and pedestrians. So if you consider the public health part of the environment, you might want to pay a little more attention out on roads where non-drivers might not be able to hear you coming before it’s too late. Or, you know, ride a bike.

Jackson West has ridden a bike around the San Juan Islands, up and down the Cascades, in Vancouver, Seattle, Brooklyn, Austin and all over the Bay Area. He’s most worried about getting clipped when passing the back-up of cars waiting for gas at Fell and Divisadero, and thinks Division could really use a dedicated bike lane. Have any bike-related questions? Send an email!