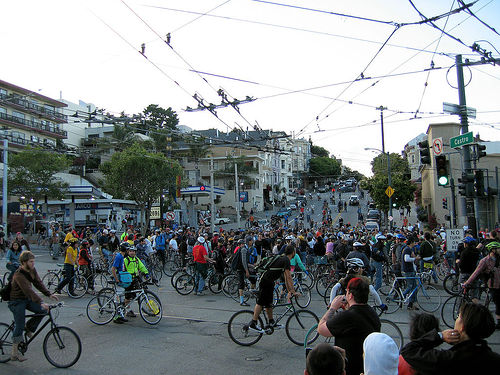 Police Chief George Gascon has gotten a new round of controversy rolling around San Francisco by kicking the tires of Critical Mass. “If you did an initiative to get rid of Critical Mass, I think it would pass by a large number of votes,” Gascon quipped at a press conference, promising to review police procedures related to the event.

It is true, cyclists in San Francisco are a (growing) minority, and even San Francisco Mayor Gavin Newsom “was quick to point out that there was no such ballot measure in the works,” according to the San Francisco Examiner. And to be fair, the comments came as part of a larger announcement on the chief’s crime rate reduction targets, including a stated goal of ten percent reduction in collisions between cars, bikes and pedestrians.

“We’ll stop short of asking Gascon to ‘bring it on,’ but only because we’re not macho idiots, and we know he has more important work to do.”But it’s a tetchy issue that seems as untouchable politically as extending meter hours or raising parking fees to make up to the cuts in state subsidies that have helped to put the Municipal Transportation Agency in the red for the foreseeable future. The last time anyone tried to crack down on the now 18 year tradition, with Willie Brown’s efforts back in 1997, it led to angry protests and increased participation. Police in New York City, where Gascon mentor William Bratton once instituted a different “critical mass” strategy of beat cops to cut down on crime in the city, have been far more effective in keeping that city’s Critical Mass rides relatively feeble.

After a violent incident in 2007, Critical Mass did a bit of soul-searching, and the tone of the new SF Critical Mass site has been decidedly anti-aggro bros. In the response to Gascon’s announcement posted on the site, a call to evolve the “entirely predictable” event with new tactics included a discussion of a less centralized ride that might start at multiple locations and be organized via mobile devices and text updates. “We’ll stop short of asking Gascon to ‘bring it on,’ but only because we’re not macho idiots, and we know he has more important work to do.”

Sure, there was the Critical Manners ride started in 2006 with folks promising to obey all traffic laws and signals, but that was by its nature a less visible direct action even if it raised a salient point — that the success of Critical Mass at being big and visible for so many years might now be working against it. As Gascon and many area politicians realize, it’s not necessarily that more people drive than support the ride, but that the people who drive are the ones who show up to the polls and donate to campaigns. Critical Mass may be probably the best known result of direct action inspired by a long tradition of anarchist political thought. Another long tradition of anarchist political thought? That the act of voting is collaboration with and capitulation to state power, unlike popular direct action.

An attitude which, admittedly, contributes to its ultimate strength. By not planning rides, or getting permits, or having leaders, or following traffic rules, or lobbying politicians, it has yet proven blob-like in its resilience — try to destroy it and it only grows bigger, stronger and angrier. Credit Gascon with understanding this as well. Even the San Francisco Bay Guardian argues that police policy towards the event could potentially make the ride smoother, less antagonistic and even cost the city less in police overtime, and Gascon promised no crack down, simply a review of procedures.

In the mean time, feel free to get out for any number of other community rides, including the new, monthly NOPA Velo ride, or any of the events on the San Francisco Bicycle Coalition’s calendar. The collective power of people riding stylishly and responsibly every day with a smile will help to contribute to the ultimate critical mass of making intracity cycling practical and popular, while for city leaders like Gascon and Newsom, the best idea to defuse the tension may lie in addressing the grievances over safety and respect that inspired the ride in the first place.

Jackson West has ridden a bike around the San Juan Islands, up and down the Cascades, in Vancouver, Seattle, Brooklyn, Austin and all over the Bay Area. He thinks San Franciscans should be proud of having inspired a worldwide movement. Have any bike-related questions? Send an email!