You may think of Swan Lake as the pond outside of the Palace of Fine Arts, but it’s also one of the most revered and timeless story ballets ever with roots dating back to the late 1800s. Most ballet companies perform it, and San Francisco Ballet is no exception. Last year, SF Ballet debuted a new version of Swan Lake. Now, what’s new about a 120 year-old ballet, right? Well, this one had almost all new choreography, tightened up pantomime, original costumes, and some stunning visual effects. Not everything was to my liking, but this is art, so it’s all subjective anyway. I got another chance to see SF Ballet’s Swan Lake last night during its encore run, and was glad I did.

The prologue, opening to the recognizable woodwinds of Tchaikovsky’s score, gives us a taste of what’s to come, introducing us to the lovely princess Odette as she’s entrapped by Anthony Spaulding’s Hulk-crossed-with-Golem (at least in character. In my head, I heard him grrring and grunting as he whispered sadly, “My precious!”) Von Rothbart. Is that his full name? Do his friends call him Von? I haven’t a clue. But no matter his moniker, he magics Odette into a swan by day and a swan princess by night, and the audience sees this transformation through a projection against a light-colored scrim. It’s cool and different without taking too much attention away from the story.

In the first act, we meet Prince Siegfried, danced last night by Vitor Luiz, as he’s hanging out with the locals (peasants and aristocrats, all lounging and chatting outside of the main castle doors), celebrating his birthday. Now, politics aren’t really discussed in ballet, and I noted this last year, but I have yet to wrap my head around this 20-something prince cavorting outside the castle with his grandfatherly tutor and a bunch of townsfolk in tow. As Seth Meyers and Amy Poehler would say, “Really?!?” He’s hanging out with his buddies, the aristocrats, and the frolicking boot-attired peasants?

But putting the right side of my brain on hold, I enjoyed most of this section. The minimized pantomime helped speed things along (for those, like most people, that don’t know the Swan Lake story, there’s a handy play-by-play in the evening’s casting sheet as well as in the program). Clara Blanco’s crisp turns and effervescent smile stood out in the pas de trois (a dance for three people), and the peasant dance added a little peppiness after the aristocrats threatened to No-Doze me. 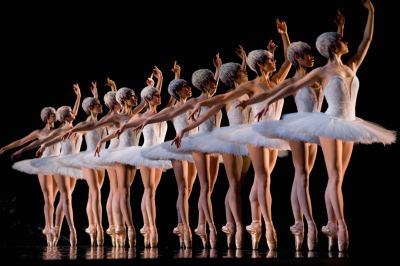 The strength of the swans is a testament to the depth of any company, and in last night’s Act II, the female swan flock were out in full force, with supple shoulders and soft bourr