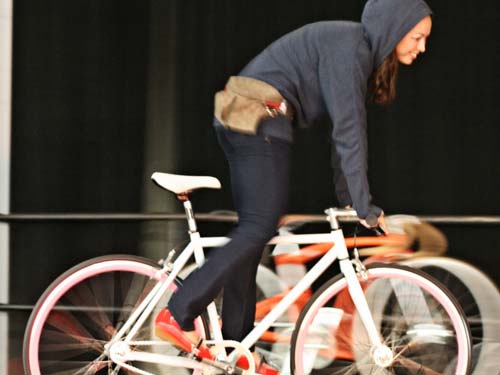 Last night’s annual Winterfest fundraiser for the San Francisco Bicycle Coalition was full of pretty people looking fit and happy making bids on art, travel, bikes and other things they can afford with all the money they aren’t spending on gas, insurance and parking tickets. It was nice to be among fellow travelers, if for a brief moment. But they are the converted, and when I originally pitched this column, it was in the proselytizer’s hope of willing new butts onto bike seats.

In the past couple of weeks, I’ve been repeatedly reminded that cycling is still perceived as uninviting, even scary, with a number of otherwise able-bodied friends expressing safety fears, concerns about their level of fitness or dexterity, and swearing off cycling in San Francisco or even beyond. I imagine many of them rode bikes when they were even more awkward kids, purely for the joy of it. And I can tell you, it doesn’t get any less fun just because you’ve grown up.

Cycling isn’t just an environmental and public health issue, but a feminist oneOf particular concern is that of the five specific cases in recent memory, four of them were women. And the crowd at Winterfest reflected that gender disparity, at it was a bit of a sausage-fest, with my unscientific count estimating two guys for every girl. Even the new 90210 has figured out those favorable dating odds! That’s not to say there aren’t a large number of women who are confident and capable cyclists — many could probably kick my ass on a ride — but its clear that if the cycling community wants to grow its ranks, it might focus its efforts on convincing more women to take up cycles.

Unfortunately, there may be more at play than just a general lack of skill or understanding on the part of women who don’t cycle — larger issues of socially fabricated gender roles and its presumptions of normative behavior also seem at work. In other words, cycling isn’t just an environmental and public health issue, but a feminist one as well. Way back in 1896, when cyclists were lobbying for the very paved roads they now have to fight motorists for, Susan B. Anthony declared “I think [the bicycle] has done more to emancipate women than anything else in the world. It gives a woman a feeling of freedom and self-reliance.”

Certainly cars did that, too, which is probably why misogynists felt the need to tell dismissive jokes about “women drivers.” But now that (I hope) feminists see the interests of women as intertwined with those of the environment and public health, cycling might win some attention as a relevant issue. After all, an American woman’s freedom to drive when and where she pleases isn’t largely shared with women around the world, and it can be argued that the ease of and access to automobiles Americans enjoy comes at the cost of war, political corruption and environmental degradation to more women worldwide, and is a disservice to their collective interest.

But on a personal level, for both women and men, the unwillingness to ride a bike seems to boil down to a mixture of safety fears, a lack of confidence and a failure of the imagination. The good news is, all of these can be overcome. At the risk of getting all Oprah up in here, let’s do a little visualization exercise, shall we?

Okay, take a moment, and a deep breath. Relax. Now picture yourself on a bicycle. Maybe a particularly stylish one like something from an artsy European film. It’s a sunny day, and your riding through the neighborhood, a load of fresh produce in your basket. You’re wearing fashionable clothes a size smaller than your old wardrobe (I know I am), and smiling. Dipping in and out of traffic with