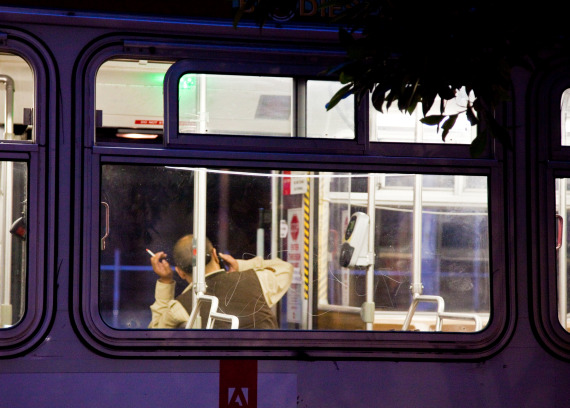 Writer and photographer Travis Jensen says “The bus is a 38BX line (bus number 766), which makes only two stops downtown before shuttling passengers non-stop to the city’s Richmond District. Express buses usually line up on Davis Street prior to picking up passengers. According to the schedule on the SFMTA website, this appears to be the 5:10p.m. bus., which leaves less than five minutes for the bus to air out before passengers board.”

Is it against the rules for Muni drivers to use buses as their personal smoking lounge while on their breaks? Jensen says “I’d probably be arrested for lighting up on a bus. Drivers should be held to the same standard, no?” We’ve emailed Muni spokesperson Judson True to get some clarification on Muni policy, but he and his colleagues are out of the office for the Veteran’s Day holiday. We’ll update if and when he responds.

Update: True responds, though he’s on holiday: “There is no smoking on SFMTA property, including Muni buses.” So there you have it — this is a definite “don’t.”