Pet Airways To Expand To SF In 2010, But We’re Trying Them Today 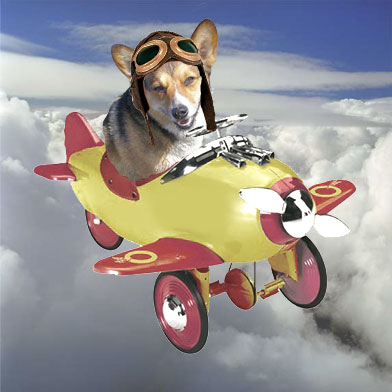 4:30 AM: When an airline puts your pet in cargo, all bets are off that they’ll be safe. For crying out loud, I’ve seen what they can do to one suitcase during a flight! A dog in a carrier doesn’t stand a chance. I saw that a study by the San Francisco SPCA (unfortunately not online) found that of the two million animals transported per year in the cargo holds of commercial airliners, approximately 5,000 are injured in transit. And if you do a bit of searching online you can find the FAA incident reports. But don’t. It’s horrible.

That’s what brought my sleek, aerodynamic and personable Corgi, Harry to Pet Airways. His 26 pounds is distributed in his 16 inches of height (counting those ears,) 24 inches of length and eight inches of width, which means he’s not small enough for the passenger compartment of a commercial airplane. But on Pet Airways, he’ll fly in a well lit, climate-controlled main compartment. No being left on the tarmac or crushed by shifting cargo.

Alysa Binder, Executive Vice President and Co-Founder of Pet Airways, really stressed this to me. Binder says she knows the challenges and trauma of flying with a pet who isn’t allowed in the passenger compartment of human airlines. “The safety, care and comfort of your pet is our #1 priority,” she said. “We love them and take care of them. We’re responsible for them.” Pet Airways now flies to Boston, New York, DC/Baltimore, Chicago, Denver and Los Angeles. They are expanding service to include Fort Lauderdale this December, and Binder says they’ll be adding San Francisco next year, noting that she used to live here, and knows how much San Franciscans love their pets.

Harry and I are in Milwaukee after moving a friend’s car there earlier this year, and I never thought getting him home would be such an adventure. Here are some of the travel options I considered:

— Rent a car and drive us back. The surcharge on the one way was very high, over $1,000 for most car companies–and that’s on top of the other rental fees

— Take a train? The California Zephyr sounds like a lovely trip from Chicago to SF — but only service dogs allowed. And while it sounded nice for me, the whole potty break thing for Harry seemed dubious on the train. Not to mention it is not cheap and takes several days.

— Tried several airlines to see if by purchasing adjacent seats could Harry travel in the passenger compartment. Nope. Oh – and isn’t it nice that even if you do pay the hefty fee to take your tiny dog on board with you, the dog is your one carry-on. That means your laptop flies cargo if anyone gets frisky about the rules.

— See if there are any you-drive-it cars for someone moving to SF from here. Nope.

— Northwest seems to be one of the more pet-friendly airlines, which isn’t actually saying much. Harry would still have to be in cargo on NWA. Flying your pet through a connection in cargo is exponentially increases the chance that something bad will happen.

— Take my chance with him in cargo on any one of the nonstops from Chicago to SF. (There is only one nonstop airline from Milwaukee to SF and they don’t take dogs in cargo.) But all of these airlines have a rule that if the temperature drops below 45 degrees F they will not board the pet in cargo. November in Chicago? You’re kidding me, right? And the airline can decide this at the last minute.

Every time I looked at Harry, I imagined this scene: Noisy, crowded O’Hare airport. Harry in a crate being carted off to cargo by a stranger. He is looking at me through the crate door. He’s scared. I’m a wreck. I just couldn’t do it. Almost went with the rental car option before I realized Pet Airways flew to LA. And there’s no surcharge to rent a car in LA and leave it in SF.

So, I booked Harry a flight to LA on Pet Airways, myself a parallel flight on Frontier, reserved a car in LA. So far I like the experience, Pet Airways called a few days ago to go over things with me. The person I talked with made me feel great that Harry would be in the hands of people who LOVE pets. And this morning we set off at 4:30 AM to drive to Chicago and begin the adventure.

Stay tuned to hear how the day goes.

8 AM: We drove up to the Pet Airways gate, located near the private jet area. We knew we had the right place when, on approach, we noted a fellow in full pilot regalia escorting an ancient dachshund along a grassy bank by the parking lot. 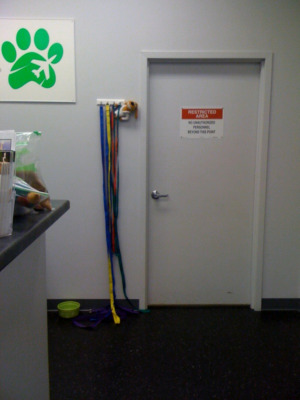 Leashes are used to escort pets to the plane, and for a walk as needed.

Having emptied H along the same grassy bank, we entered the PA check-in office, where Terra (that’s her on the right) greeted us warmly. At first, H was a little antsy in the unfamiliar surroundings, which looked suspiciously like the vet’s office. He voiced his concern and blew his coat copiously. But after a few minutes of attention from Terra, he gave her a bracing downward-dog and a good hand-licking.