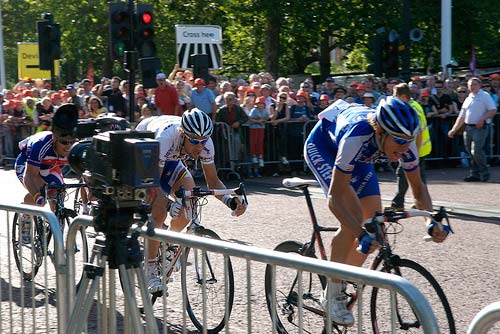 Last week in Los Angeles, Dr. Christopher Thompson was convicted of six felonies, including two counts of assault with a deadly weapon, after pulling in front of two cyclists in his Lexus and slamming on the brakes. The story is tragic, if eventually positive — an LA jury actually convicted a motorist of intentionally harming cyclists.

But one small detail of the case struck me. During cross examination of one of the victims, Ron Peterson, defense attorney Peter Swarth suggested that “bicycles are inherently unstable.” It’s the sort of bicycle safety myth pedaled by the likes of Rob Anderson, who, along with attorney Mary Miles, has successfully kept the city of San Francisco from implementing traffic improvements meant to benefit cyclists for years.

Yes, a still bicycle has a tendency not to remain upright. Shocking, I know. A bicycle in motion, however, does not. Why? Physics! Namely, the angular momentum of a rotating bicycle wheel creates a gyroscope, which, combined with centrifugal force, actually make a bicycle quite stable indeed. The faster you go, the stronger the forces at play and the more stable the bike becomes — hence, it’s much easier to balance with no hands on the handlebars the faster you go. Check out how a battery-powered gyroscope build into a wheel creates a kids bike that doesn’t require training wheels, even when moving at low speeds.

Which brings me to my next point about the science of cycling and how it relates to the supposed “backlash” against cyclists. The New York Times blew the lid off the scandalous practice of coasting through stop signs by cyclists, particularly along the wiggle. As I pointed out elsewhere, not because of any demonstrable uptick in accidents or injuries, but simply because it apparently angers and annoys or something. Because of course no motorist has ever broken the speed limit, double-parked in a bicycle lane, or pulled in front of two cyclists going the speed limit and slammed on their brakes.

But there are a number of very good reasons for cyclists not to stop. Note that a cyclist who comes to a full and complete stop as required by law actually decreases their stability, making them more vulnerable to accidents, not less. Not to mention the fact that losing all that forward momentum is far more of a hardship on cyclists, who provide their own power, than motorists. If you think of traffic in terms of fluid dynamics, each stop sign is like a dam, backing up the flow of traffic. It’s a good way to slow down cars that might otherwise sail through intersections, potentially harming themselves and others, but which serves little purpose when it comes to cyclists moving at lower speed who have better visibility, maneuverability and a shorter braking distance than cars.

A cyclist who comes to a full and complete stop as required by law actually decreases their stability, making them more vulnerable to accidents, not lessIt’s part of the larger struggle of cyclists to change two generations of automobile-centric traffic planning. Amusingly enough, the first group of San Franciscans to lobby for paved roadways were, actually, cyclists, decades before automobiles were widely available. Why? Because paved roadways significantly increase the efficiency of bicycle travel by decreasing the amount of rolling resistance. The friction between cycling advocates and car drivers aside, the friction where the rubber meets the road is where a significant amount of forward force is both gained and lost.

It’s the reason why road bikes have skinnier wheels, and higher tire pressures, than off-road bikes. For the most efficient ride on paved streets, you’ll want to keep your tire pressure topped off to the level indicated on the tire — a higher-pressure tire means the wheel surface holds it shape better, meaning less contact between tire and surface. For off-road cycling, you might want to let some air out — by adding more rolling resistance, you improve traction. Hence, mountain bikers might have half the pressure in a tire compared to a road racer.

And energy efficiency is really where cycles outshine cars. The human body is far more efficient at converting energy fixed in calories (or, more accurately, kilocalories) than automobiles. Thanks to biochemistry, the human metabolism can turn 30-40 calories — 4 grams of fat or 7 grams of carbohydrates — into a mile of forward motion on a bicycle. How many calories worth of gasoline does it take to move a car one mile? Over 1,000 if the car gets 30 miles per gallon, which few do. That’s because an internal combustion engine is not nearly as efficient at converting chemical energy into kinetic energy, with most of the former wasted as heat.

There is a physical force that both cyclists and motorists have to overcome, and can create an advantage for themselves — aerodynamics. The movement of air against a body in motion creates friction just like rolling resistance. And both bikes and cars can reduce this friction by drafting. Compare the “Shake and Bake” in The Ballad of Ricky Bobby with the sprint on the final leg of this year’s Tour de France by Mark Crenshaw and Mark “The Missile” Cavendish of the Columbia-HTC Team. In both cases, the lead vehicle expends more power per foot second by breaking the wind for the tailing vehicle, allowing the “pulled” party to conserve enough energy to pass even faster.

Though like with cars, where in normal situations drafting would be considered “tailgating,” the same goes for riding down market street — don’t draft strangers, because one of them might actually brake for a stop sign, causing a rear-end collision and sending you hurtling through the air at the same speed you were going on your bike. Momentum: She is an indifferent mistress.

Jackson West has ridden a bike around the San Juan Islands, up and down the Cascades, in Vancouver, Seattle, Brooklyn, Austin and all over the Bay Area. He likes to keep things light. Have any bike-related questions? Send an email!