Breeder Responds, Says Cargo Should Have Been Fine For Harry The Dog 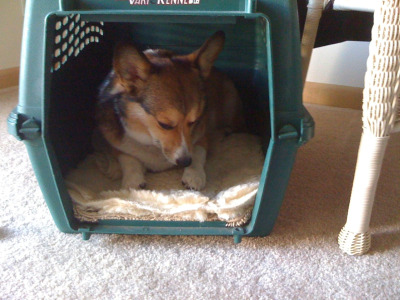 Our account of Harry the Dog’s cross-country trip on Pet Airlines generated a response from commenter LolaMarigolda. She said:

It is sad that people don’t take the time to really look at the airline incident reports so they can see what is really going on. For the most part, it appears that quite a few animals haven’t been acclimated to being in a crate and the vast majority of animal deaths are shown (by necropsies) to be caused by either undiagnosed heart/lung issues (dogs) or heart/kidney issues (cats). Certain brachial plectic breeds have a significantly higher instances of death; then again these same breeds overheat easily even at cooler temperatures.

It is also interesting that the author has read all of these incident reports and information on dogs traveling in cargo and still got basic info wrong. The cold weather embargo actually occurs if the weather is below 20 degrees; however, if the temps are less than 45, the airlines require an acclimation certificate/letter from the vet stating what the lowest temps and amount of time the animal may be exposed. For most healthy animals, short exposure (such as while waiting to be loaded) isn’t a problem.

I have shipped several hundred dogs over the course of the last 25 years (for dog shows, breeding purposes, and pups to new homes) and have never had a problem. Then again, I’ve never attempted to ship a sedated, sick, or non-crate acclimated animal.

Thank you for commenting, Lola. You make very excellent points. And the incident reports do show that according to the airlines some of the animals were medicated at time of death – which was not reported by the owners. They also show events like events like how a puppy was left on the baggage trolley, apparently by the driver who thought the puppy was cute and had it on the seat next to him. The baggage was loaded and then what happened is unclear but it seems like the puppy was never put on the plane. When the puppy was finally found it was “in distress” and rushed to a vet. Hard to tell what really happened from the incident report, but the puppy died.

Being a dog professional over the past 25 years, you’ve had no option but to fly your dogs cargo. And I am happy that you never had a negative experience. Several years ago I was on a flight to New York on the week leading up to The Westminister. I saw the flight’s captain come back personally and tell a passenger that “Josh” was safely onboard. He also told other passengers their dogs were safe. This is the sort of service most airlines should try to offer their passengers with a pet flying in cargo.

In the past, my Shepard mix flew coast to coast several times on a traditional airline without a problem. But this was over 15 years ago. Airports were a bit less hectic. Agents were plentiful, as were ground crew. I think we can all agree that travel has gotten a great deal more challenging since then.

Regarding the 45 degree issue you mention: The airline that seems to make the most effort at transporting animals is Northwest Airlines. Here’s their Priority Pet program info from their web site:

* Employee training at all locations.
* Dedicated personnel and facilities to speed connections at our Detroit, Memphis and Minneapolis/St. Paul hubs.
* Written confirmation provided to you before departure that your pet is safely onboard the aircraft.
* Transportation on all Northwest and Northwest Airlink aircraft equipped with heated and pressurized baggage compartments.

NWA is making an effort to reach out to pet owners, and I applaud them for this. The airlines that fly a nonstop to California from the Milwaukee area do not include NWA.

I imagine you fly dogs that are prepared for the experience. That are crate trained and healthy. Harry is just my little wingman. He is crate trained, healthy, and loves cold weather. I know that chances are high that we could have flown cargo from Chicago and he would have made it to SF alive and well for the experience. All I could think of was the “what if?” If anything had happened to him, there wouldn’t be solace in the world. Especially because I had the option and ability to fly him in a manner that seemed even safer and more secure. 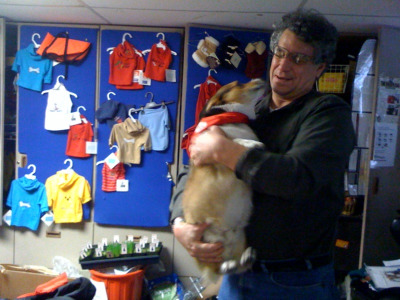 And Harry? Harry is really home! This morning, he raced into Barry for Pets to say hi to Gary Collings, one of his very favorite bi-peds.