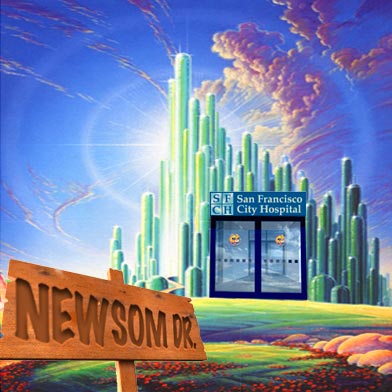 As anyone who’s ever read a comments section of any local publication, including this one, knows, “Newsome” is a very common misspelling of our Mayor’s last name. So look at this “letterhead” from the terminally ill locally (that is, for two final episodes) shot TV show Trauma. (Brought to our attention by tipster Jason, thank you!)

“100 Newsome Drive” (a typically Southern address), is apparently the location of Trauma’s chimerical San Francisco City Hospital. A slightly deflected ode to our Hollywood-good-lookin’ mayor? A misspelled (note: obsessing about spelling is for overly literal tools) look into the future, when he will be a man of legend and song, joining luminaries like Samuel Brannan and John W. Geary (who was a SF mayor and Gov of Kansas and Pennsylvania, which gives me an idea…) in street eponymy? Or is it just, played out on what some might describe as a “slow news day”? You be the judge.