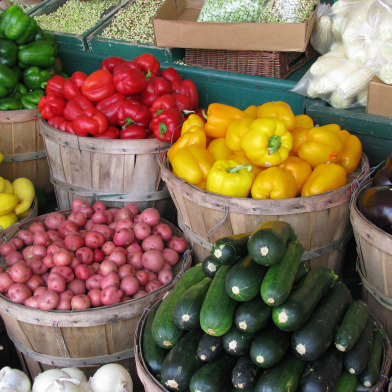 Tom Philpott isn’t a local, but he’s no stranger to the City’s foodie ethos or political activism. As the food editor for Grist, a Seattle-based online environmental magazine, Philpott shares his expertise on the intersection of food and politics in his weekly column “Victual Reality.” What’s more, he is the co-founder of Maverick Farms in Valle Crucis, North Carolina, where until recently he plied his trade as an organic farmer. He brings his food analysis to the Bay Area this week in order to guest star in Michael Pollan‘s classes over at UC Berkeley, and will be “hosting” (sadly, drinks are not on Tom, but he’s there for the chatting) a happy hour at 111 Minna tonight from 6-8. I caught up with Philpott near the Appeal’s Mission office to get his dish on food activism and the real reasons most people can’t afford to buy fresh, organic, and local.

LH: You moved from your job as a finance writer for Reuters to food politics. How did that happen?

TP: I liked covering business, but I wasn’t surprised when all of these giants toppled. I was down there for the dotcom bubble and saw the insanity of it. Meanwhile, I was learning about food. At the time, food was here and politics was over here.

I was in New York and there was community gardening. I had a plot in Brooklyn. At one point, Guiliani thought they were communistic and sold them in this overnight deal. Bette Middler bought a bunch of the gardens — she dropped about $4 million on it. Then Spitzer put a restraining order on Guiliani like a bad husband to keep government bulldozers away from the gardens.

My girlfriend had family land in the Blue Ridge Mountains. We started in 2004 and we saw this as a laboratory from day one. We wanted to create an institution for helping make sustainable, local food affordable for everyone. There’s really two food systems there, one for the wealthy and one for the poor, which is WalMart.

I wasn’t working for Reuters anymore, and you need off-farm income. So I started writing bittergreens.com (ed note: now defunct, hence the lack of link), my food politics blog. Eventually, my back was killing me and I had no health insurance. The work we were doing was extremely labor intensive, and I had started farming at like 38 or 39. So I started full-time at Grist.

I don’t always agree with Alice Waters. In some ways she gets on my nerves, but she’s done good things with school lunches.LH: So you’re not a full-time farmer anymore.

TP: My work at Maverick Farms is mostly administrative and vision creating. It’s a multi-farm CSA with ten farms involved. It’s a mountainous region without a lot of bottom land. The advantage is, there are a lot of different elevations, so when something won’t do well in a certain area, it will do well in another. With ten farms involved, we have a robust offering. One year it wouldn’t stop raining, and in those conditions, stuff doesn’t come up, it doesn’t germinate. With the CSA, the community takes a share in the risk. That is very stressful. It’s one thing to say, this week we don’t have too much. Now if we don’t have something, we can call another farm and they might.

TP: Yes it is. It’s a knotty complicated issue, because you’ve really got to charge a price.

LH: We have a trend of urban farming in the Bay Area. What do you think of the DIY food approach?

TP: I think its super important. It’s the ideal to do food in the foodshed. Cities are never going to be completely self-sufficient, but the big advantage of a city is, it’s a place that sucks in all this stuff and puts out all this waste. If you can capture some of this waste stream, there’s incredible fertility. There’s this farm in Milwaukee that composts waste from the city and has these intensive raised French beds.

LH: We have compulsory composting in San Francisco.

There’s a rumor that San Francisco sells sludge as a garden amendment. This comes from whatever goes into the sewer, and it’s not just all the disgusting things you’re imagining, but also pharmaceuticals, heavy metals… it really shouldn’t be used. There’s a lot of lead. (LH — this is not just a rumor, though the sludge-post is free, not sold.)

LH: I think there’s a growing sense that there’s only so much the “vote with your fork” consumers can accomplish as consumers. Beyond changing shopping habits, what do you see San Francisco’s locavores doing about food politics, and what would you like to see?

TP: I’d like people to think as citizens about foodsheds. Food Policy Councils are groups where people get together and talk about these issues, but they’re politically impotent. They should be more politically powerful. Cities already think about where they get their energy, where they get their resources, and they have certain arrangements. I think cities, as a matter of course, should think about their food systems. Everyone should get together and look at the system and its infrastructure gaps.

LH: People in San Francisco are known for their food-fixation. With visitors, it’s sort of a “roll your eyes at the Bay Area gal with her strict seasonal diet and mandatory yoga regime” situation. How do you present food politics as something grounded, normal people are into?

TP: I think, optimistically, 3-4% of food sold now is local and organic. One thing we were saying in Michael Pollan’s class yesterday was that there hasn’t been another movement that’s been so successful in media terms — we’ve really got the elite opinion — but we haven’t gotten much traction with public opinion. We don’t think about that.

We need to start with schools. We learn about lots of things at school, but we also learn about food. We learn that Tyson chicken nuggets with ketchup and fake mustard are food. People learn habits. People break habits, but we can’t expect everyone to.

This is a problem — I don’t want to say it’s a conspiracy, but there’s a history of setting up school lunches to be the way they are today. Everyone knows that in the Reagan era they tried to make ketchup qualify as a vegetable. They actually failed at that. What they succeeded at was, well, it was the government responsibility to outfit school kitchens. Because there was such malnutrition during the time of WWI that there weren’t enough strong, able bodies to send overseas. I think it was a New Deal thing, that kitchens were put into schools and cooks prepared the ingredients there. Then it was Reagan time, and they pulled the plug and made it up to school districts. Then came the cooker machines and the vending machines, which is a money maker for the school. There’s no more cooks. New schools don’t even have kitchens.

Lunch hour is a learning time. I don’t always agree with Alice Waters. In some ways she gets on my nerves, but she’s done good things with school lunches. You can use cooking and food in chemistry, biology and history. We have to think about how we’re teaching people that fast food is food.

Food is not apart from the rest of the economy, and the overall economy is screwed.LH: What would you say to someone who’s reliant on food stamps, which in CA is about $7 a day or $200 a month?

TP: I would admit that it’s really difficult. Start by admitting the difficulty. The encouraging thing is these programs that let people double their money at farmer’s market. At WalMart, it leaves the community, but at the farmer’s market it circulates and creates wealth. Let’s say you’re on public assistance in West Oakland. I think yearly people on assistance spend $1,000 on food? But there’s 500,000 people there, so that’s $500 million in buying power. That’s going to WalMart, supporting low-paying and humiliating jobs.

To me, it’s the biggest challenge we are facing. People need access and alternatives. The movement needs to start thinking strategically about this.

Food is not apart from the rest of the economy, and the overall economy is screwed. We have a system of wage stagnation, and in general the money is getting pushed upward. With an economy like that, you have to have cheap food or there will be riots. We’re in a knot. How can we ask people to pay more for food with minimum wage? We need jobs that are skilled, dignified and well-paid.