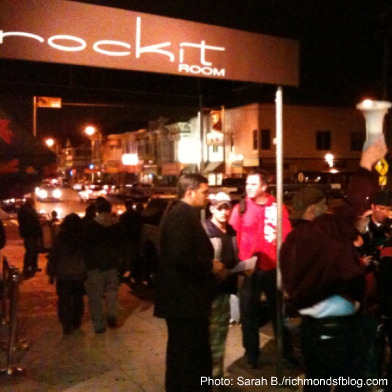 6:38 PM: Activist Pollo Del Mar says she’s received a call from Weekly writer Eric Arnold, who apologized to her for any “inconvenience.” Said Del Mar, “an ‘inconvenience’ is misspelling my name (or mistakenly identifying me as transgendered). Accusing me by name in print on their website of assaulting an international recording artist and an entire dancefloor filled with people extends considerably beyond ‘inconvenience.'”

Violence is never the solution in any situation, and I have what I hope to be a very solid track record of work within our LGBTQ community to illustrate my belief as such. Additionally, I am extremely fortunate to have years of working relations with so many local elected officials, public figures, nonprofit organizations, social and political activists not to mention concerned everyday citizens, all of whom are willing to reiterate as much if ever asked.

I am so grateful to know that when the Weekly’s Eric Arnold lobbied such ridiculous allegations against me, all of those people rallied immediately to my defense. It goes to show why being so integrally involved in our community is and always has been a blessing.

5:44 PM: The Weekly’s removed the story and replaced it with another one (with a different link) that says that, as opposed to a charge of protesters led by Pollo Del Mar, “someone let loose with pepper spray” during the concert. It notes that “An earlier version of this story mistakenly identified Pollo Del Mar and other LGBT activists as being responsible for the incident, based on misinformation from Banton’s management.”

It’s still unclear from Arnold’s article that the pepper spray was related to the protest (“someone let loose with pepper spray” at a Boss Hogg show I attended in 1996, but my first thought wasn’t “oh no, protestors!”) Even an employee of the Rockit room said, according to Arnold’s revised article, that “the protesters left before the pepper spray incident and never entered the venue.”

Petrelis remains unsatisfied, musing “Makes me wonder what else cannot be trusted in the SF Weekly’s reporting on anything to do with Buju.”

3:50 PM: Local activists are calling into question SF Weekly blogger Eric Arnold’s reporting on the controversy surrounding singer Buju Banton, who was met with protests last night at his performance at the Rockit Room (see more coverage here and here).

Arnold’s September 7 report on Banton’s canceled Regency Ballroom performance received a number of comments calling him out on his remarks critical of protests of Banton, and his “Weekend Pick” of Banton’s local shows certainly raised eyebrows.

But it’s his latest article that’s gotten him in really hot water with local activists — a Weekly blog post that said (it has since been removed, which is unfortunate — wouldn’t a correction be a better move if one fucks up a story? Anyway, here’s a screen cap):

During the concert, a small group of protestors–including one man in full drag–stood outside chanting slogans and attempting to engage clubgoers in dialogue (video of the protest is here and here). At some point, the group, led by transgender activist Pollo Del Mar , rushed into the venue and pepper-sprayed the crowd, forcing some of the crowd to disperse temporarily. The show continued after the incident.

“We play America for the fans, not for the protesters,” Banton said following the incident, declining to make any additional statement on the matter.

Well, here’s the thing: according to Del Mar and others, this didn’t happen. In an email, Del Mar states that “Bevan Dufty, promoters from Rock-It Room and other protesters have all called the Weekly” in an effort to get a retraction from the publication.

Arnold’s article also got the attention of local gay activist Michael Petrelis, who was at the “landmark” meeting with Banton yesterday. After looking at Arnold’s body of work, Petrelis cites this previous article of Arnold as one that “dismisses concerns about the antigay violence in Jamaica” and said that “Eric Arnold is not an unbiased reporter for the Weekly. He’s part of Buju’s team.”

If the activists rushed into the club, where the hell was security? I wonder, given all the concerns of the club and Buju’s team, how security could have been so lax.

Also, it would be great if your writer could produce a witness, maybe even some video or pics of the alleged crashing of the club and the alleged pepper spraying.

An email sent to Arnold through the Weekly’s terrible email form has yet to be responded to — we’ll let you know if we hear from Arnold.