Remember when you were a kid eating ice cream sandwiches after a barbecue? Sitting outside, letting the melting ice cream drip on the lawn…how about recreating that great feelings, but giving it a little more grownup flavor? How about these Hazelnut Kahlua Brownie Ice Cream Sandwiches?

Oh yeah, and roll the edges with lots and lots of chocolate sprinkles…Gotta have the sprinkles! These ice cream sandwiches are an unexpected hit at the end of a barbecue or even a dinner party. You just have to smile when someone sets one of these down in front of you! The sandwiches are best made over two days (or you can make them the weekend before you need them), this gives the ice cream time to firm up so that the sandwiches stay together nicely.

Here is how you make them: 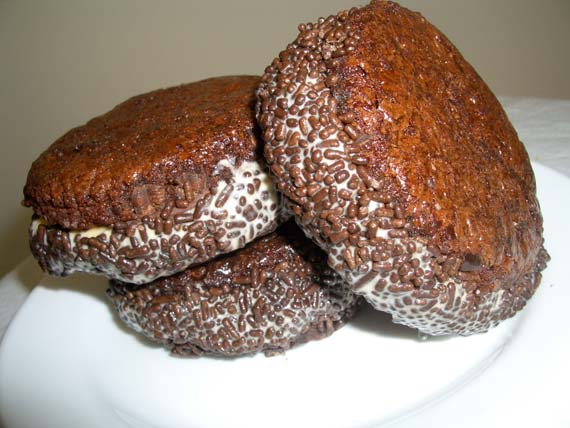 You can find the basic recipe that I followed here. I switched some things up when I made mine: To make 12-14 three inch round sandwiches you will need:

Spray two of the jelly roll pans with Pam and line with parchment paper. Line the third jelly roll pan with plastic wrap. Make sure to go up and over the edges.

Make two packages of brownies, one at a time, for each jelly roll pan following the instructions from the recipe. The brownie mix I bought already had chocolate chips in it so I didn’t add any extra. I also used Hazelnut Kahlua as the liqueur in my brownies.

Spread the batter into each jelly roll sheet and use a plastic spatula to spread it out to the corners as evenly as possible. Bake both sheets in a 350 degree pre-heated oven for around 15 minutes (rotate the sheets, top to bottom, after about 8 minutes).

When finished let cool completely, cover pans with plastic wrap and put into the refrigerator.

Next, take the two 1.5 gallon cartons of vanilla ice cream and let soften up but not become melted. In a large bowl mix in 1/4 cup of liqueur with the softened ice cream until well combined.

The recipe calls for Irish Cream but I used Hazelnut Kahlua, the same as in the brownies. Once the mixture is well combined pour into the jelly roll pan that is lined with plastic wrap. Spread the ice cream evenly in the pan, cover with more plastic wrap and place in the freezer overnight.

The next morning remove the chilled brownies from the fridge. Use the cutter (or a knife) and carefully cut out the “tops” and “bottoms” for your ice cream sandwiches and transfer to a parchment lined tray (save the scraps to eat later!).

When all the brownies are cut out, position them on the tray so that each “top” has a corresponding “bottom”. I wanted a little extra flavor and texture so I spread a thin layer of Nutella (chocolate hazelnut spread) onto one side of each of the sandwiches.

Quickly remove the ice cream from the freezer and begin cutting out rounds and quickly placing them onto one side of the brownies and topping with the other side of brownie. This will get messy! Just move as quickly as possible, stopping to put the finished brownies into the freezer as you go along.

When all the brownies are finished, let them sit in the freezer for an hour to set up. When set and firm you can roll the sides in chocolate sprinkles like I did or you could use chopped salted nuts or colored sprinkles or mini-chocolate chips…you get the idea!

When all the sandwiches are rolled in the sprinkles place back into the freezer to set up again. After the sandwiches are firm, cover each individual sandwich in a layer of plastic wrap and keep in a ziplock baggie in the freezer until ready to serve. The Nutella develops a slightly “crispy” crunch which is a nice contrast to the creamy ice cream and the soft brownie!

The Hazelnut Kahlua flavor really comes through in the ice cream and pairs well with the brownies. Everyone will love these and you will be SO incredibly popular for serving them!