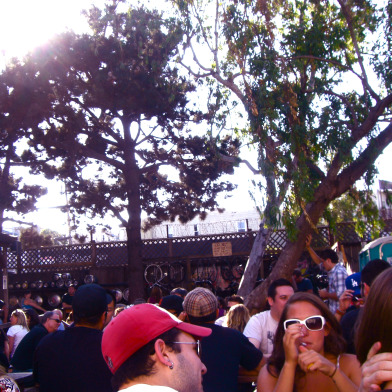 If you’re the kind of person who thinks bartenders are there to make you feel good about yourself, or at least not to make you want to cry then Zeitgeist may not be for you.

Conversely, if you’re the kind of person who believes that “bartender” does not necessarily equal “psychotherapist,” and you’ve already gotten your fill of unconditional positive regard elsewhere then you are probably a bartender at Zeitgeist.

Some people like to act like they’re at work when they aren’t, for example people who go to Ambassador on Saturday nights and dance like it’s their job. The bartenders at Zeitgeist wouldn’t be caught dead at Ambassador, but would be caught dead working at Zeitgeist like it isn’t their job. This can be very confusing for patrons who want to order a drink from someone other than their friend Grab the Tap and Pour Your Own Beer.

My friend pointed out that how good you look is indirectly proportional to how fast you get served i.e. Megan Fox = death before service; Tanya Harding = instant service; Sarah Palin = instant death. As she had apparently not brushed her hair this morning, my friend thought her chances were pretty good for getting served in record time, but as my friend’s looks are often compared to those of Elisha Cuthbert her chances were only a little bit better than those of Megan Fox.

But in the interest of the stop bitching and start a revolution t-shirt that I almost bought one time, I will say that the backyard beer garden is pretty awesome. With it’s soaring trees, and preponderance of sexy males (luxuriously punctuated by a few drunken business men) this patio is a pretty good argument for sunny days in San Francisco, San Francisco in general, and Zeitgeist. But if you really can’t handle the thought of people walking into a bar and ordering a beer, you probably shouldn’t be a bartender, unless you want to be a bartender at Zeitgeist.