Cheap Happys: Where You Went To College

“This place is for people who before the recession used to eat at better restaurants than this,” Marguerite observed upon entering Jalapeno’s Mexican Restaurant in Bellingham, Washington.

“I never ate anywhere better than this,” I said.

I guess margaritas aren’t good enough for Marguerite. It’s like she doesn’t even realize she was named after one. Then she remarks that this must have once been a Taco Bell, and you get the feeling she kind of wishes it still was, because then they couldn’t serve alcohol in the form of the Big Mama Margarita and she wouldn’t have to come here everyday. The Big Mama is rumored to have six shots of tequila in a single glass, and no one has ever stayed coherent enough to figure out if this was true.

There’s something refreshing about returning to the place where you went to college. It’s not really nostalgia so much as the comfort of knowing that time is a lot like virginity in that no one can take it away from you in quite the same way that you lost it the first time. It’s like when people say, “We’ll always have Paris.” But what they should say is “We’ll never have Paris again just like this.”

A child is standing on his mother’s lap, looking at us and saying over and over, “You don’t make enough money.” His mom seems to think this is at least passably cute behavior, although the expressions on our faces should make her think something else that starts with infanticide.

Someone at the table behind us remarks that her acquaintance went to therapy to be less creepy, and it worked! This seems to be a pretty good argument for therapy, and Sara and I feel momentarily optimistic about the psychology degrees we completed just up the street. Sara talks about getting her PhD in the same breath as she says she wants to move to Telluride to teach snowboarding. Only one of these sounds like a lucrative prospect to me, but whenever I try to snowboard I tend to end up going around and around on the chairlift while sobbing uncontrollably next to someone named Cliff.

I never learned how to get off a chairlift, but I did figure out how to leave places, and how to return and discover them anew. There’s nothing like 6 shots of tequila to make you start seeing things with virgin eyes. 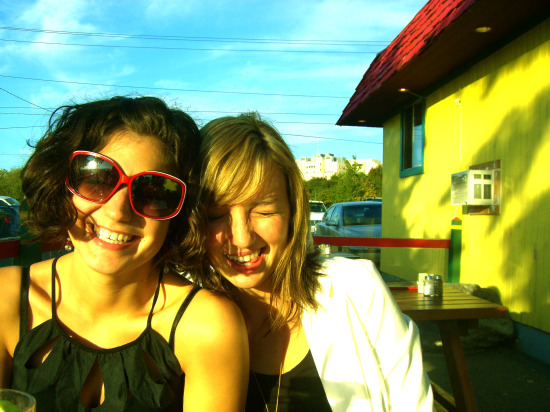