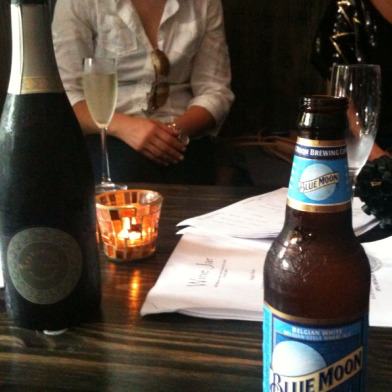 Go to Wine Jar with a few friends after seeing the Vogue documentary, The September Issue, at the Kabuki. Sit at the table by the front window, and watch wistfully as the late summer rain falls outside.

If you do this right, there’s a 200% chance that someone will say, “This is so Sex and The City,” and a 75% chance that someone else will ask them to please never say that again. But since J was missing, only the first part was said, so we had to start the character count-off, and of course no one wanted to be Miranda.

Happy Hour at Wine Jar is a full three hours (4-7pm), and offers 20% off all bottles of wine, which is an interesting way to do it seeing as how much math is involved. After struggling with our Manolo Blahnik calculator shoes we were pleasantly surprised at how much 20% could add up to when you were looking at a really expensive bottle of bubbly. It was like the more you spent the more you saved, which is truly ingenious if you think about it. But it wasn’t Mathy Hour so we didn’t.

The room had the ‘fashiony’ look of a more upscale bar in Florida. In other words, the place might have been the recipient of an extreme home makeover where the contestants had only one hour and a gift card at Pier One. The couches in the middle seemed like an awkward place to spoon, but the couple on them apparently didn’t think so. Carrie Bradshaw may have made an appearance at a place like Wine Bar, but probably only in the first season when everyone was still talking into the camera.

We ordered a few bottles of Prosecco, and the server asked if we were celebrating. “Well, we’re drinking,” we said. The server nodded absentmindedly, but it was obvious that she didn’t know how difficult it is to be the editor of Vogue.

We didn’t really either, but if Anna Wintour’s job is even an eighth as hard as it is to spend two hours watching her do her job, then we kind of did know. Our episode was ending, and I glanced up hoping to see Big’s towncar waiting by the curb, but there were only other cars in the street, and I remembered that he had left last week for calmer seas.