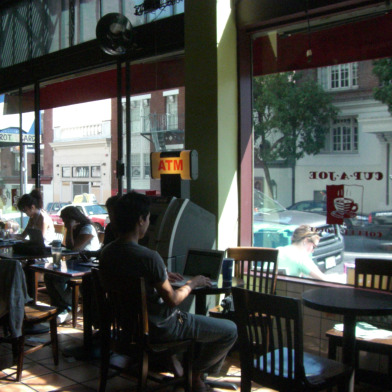 At Nob Hill’s Cup-A-Joe, the beer is good and well priced ($2.95 from 4-8pm), and there are 10 varieties on tap. The Po’ Boy is passable if you’re able to say the name with a straight face. The lemon cupcake is a somewhat nasty little piece of business with tough frosting and a dense dry stump. It’s good to look at, but when I finally decide to choose a hobby that will take me into my twilight years, cupcake watching probably won’t be it.

A sign in the window alerts passerby that they’re hiring, and the steady stream of would-be employees rolling in off the street serve to make a person feel somewhat better about their own relative hireability. One man saunters up to the counter and says, regarding his resume, “It’s not a good one, because I don’t ever write resumes.” Later, the manager asks a young woman if she has ever been sick.

Apparently, this employer requires the constitution of a character out of The Iliad when it comes to the health of potential employees. She tells him that in fact she has been sick before, and those of us watching this Greek tragedy can see that he is heartbroken at this admission. He looks at her with pity, as though she were an invalid applying for a spot in an extended care facility, while she chatters on seemingly oblivious to her quickly diminishing prospects.

Pretty much everyone who works there hates you on sight, which may have something to do with the hiring process. It is difficult for people who have never had the flu to retain much more than the thinnest veneer of humanity. They inform me that they only take cash, but refuse to point out the ATM in the corner. When I ask for a receipt the cashier says “Maybe,” and then after fiddling with the printer for a minute changes that answer to, “No.”

A row of tables flanks the outside of the caf on two sides, and a pretty red awning shields patrons from the sun. You really couldn’t ask for a prettier location to sip a beer than the corner of Sutter and Leavenworth on a sunny day in September. Across the street is the kind of stately brick apartment building where you just know you could be happy, and beyond that the street disappears over the edge of the hill. The sidewalks are not crowded, but there are people. The manager eyes the healthy ones.