Review: Comic Books are Hidden Gems at the Zine Fest

It wasn’t really fair of us to go to last weekend’s Zine Fest looking for comics — they’re not really the same thing, are they? But lately we’ve had our fill of the sharpies and scotch tape and fervent prose that is intensely personal and therefore almost completely incomprehensible. So it was with an eye for picture books that we wandered into what is charmingly called “The County Fair Building” in Golden Gate Park.

Our first though upon entering the Fest: “this place needs a BATH.” It’s the middle of summer, for heaven’s sake, and bikes were piled outside by the dozens, affixed to every possible surface like seagulls at the end of The Birds. Inside, meticulously disheveled hairstyles wandered from table to table, picking through xeroxed pamphlets about oil wars, someone’s difficult childhood, vegan recipes, and thumbing though t-shirts with messy art. Comics were sadly hard to come by, but we were lucky enough to stumble across a few gems: 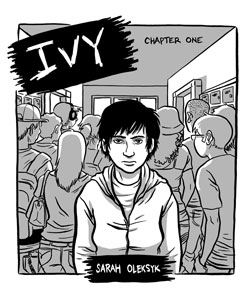 Our surprise-favorite of the Zine Fest was Book One of “Ivy,” by Sarah Oleksyk. When we first looked at the cover we rolled our eyes, like, “oh, it’s just a story about some bitter high school girl, awkward and mad and scared.” And then we realized that had just described both “My So-Called Life” and “Freaks and Geeks,” two of the best representations of high school life ever created, so we gave Ivy a shot. And yes! It is so good!

Like all teenagers, Ivy is pissed, and for plenty of reasons: her dad’s gone and her mom barely knows her; she’s artsy and therefore an outcast; she alienates everyone, even friends; she’s figured out that high school is stupid and horrible and utterly inappropriate, but so is everything in life, right? Well, no; but it’s easy to think that way until you’ve found something to live for, and Ivy hasn’t. Yet.

So her life is just one big barrier until she goes on a field trip and is unexpectedly squished up against some positive attention, and it’s one of those out-of-teen experiences (remember those when you were a kid?) where finally, at long last, there is something in life that maybe possibly does not need to be hated. (A boy.) 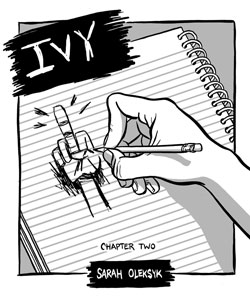 But getting to this fork in the road is just step one — now things might change for the better, or Ivy might ruin everything because she is kind of a bitch. Which will it be? We’ve ordered copies of books Two, Three, and Four; and until they arrive, we’ve put Book One on the shelf between DVDs of Claire Danes and Linda Cardellini.

We also picked up two great books from Oakland artist Joey Alison Sayers: “I Wish You Were Dead” and “Just So You Know”. After the heavy seriousness of Ivy, Joey’s work lifted our spirits back up: Just So You Know is an autobiographical comic about Joey’s transition from a boy to a woman. And it’s so funny! Despite a subject that’s as life-altering as in Ivy — well, much more so, actually — Joey’s tone is fun and optimistic, even in the face of weird questions and hormones and a nagging suspicion that she might be a bitch now. We loved the story about how she scolded a bartended for calling her “man” and then it turned out that he said “ma’am.” 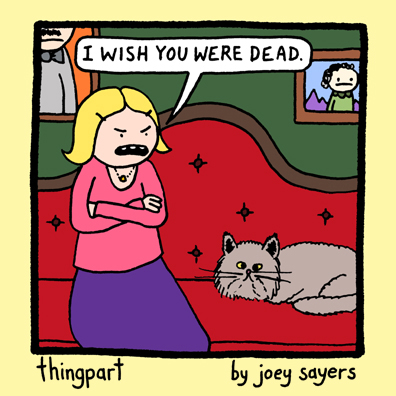 “I Wish You Were Dead” is even funnier — it’s a collection of goofy cartoons about, oh you know, this and that and whatever. Normally this kind of project is NOT FUNNY AT ALL but Joey’s one of the lucky cartoonists who is actually really hilarious. (And also maybe a little sick.) Joey was recently nominated for an Ignatz Award, a comics-industry recognition that is pretty awesome.

And now let us return to high school with Lauren Skinner’s “The Frog Prince.” Ugh! High school. Robbie Green has a crush on Austen Kean; he’s a nerd, she’s pretty, you can probably see where this is going. Austen loses a necklace, Robbie finds it, she manipulates him, he’s mad, she feels slightly bad eventually and he’s even more smitten than ever. Oh, boys. Oh, high school. Oh, humanity!

Robbie’s emotions are not quite as complex as poor conflicted Ivy’s — he’s a bit mental in his pursuit of dreadful Austen, but you know how boys are. You can see what’s coming from a mile away, so it’s a little frustrating to see Robbie wander, smitten, into Austen’s abuse; and it’s a little disappointing that their relationship plays out just as we feared. But it’s a cute little tale, and the art is the real star here: really nicely hand-painted panels with simple forms that are nonetheless expressive.

Lauren’s style also works well in “Erstwhile,” a collection of forgotten Grimm Brothers tales. These are the darker stories that don’t usually make it into modern children’s books: characters are devoured, drown, die of disease, and suffer abuse from their family. The collection is adapted by Gina Briggs, and very nicely illustrated by Gina, Lauren (who goes by “Elle” for this book), and Louisa Roy.

As in “The Frog Prince,” Lauren’s art is warm and inviting; with her rough lines, simple shapes, and warm colors, you can really feel the artist’s hand in the panels. It’s a timeless sort of look, and a cozy match for the subject matter.

Gina and Louisa, on the other hand, both have a more modern style: in particular, Louisa’s style matches what you’d find in a comic book set in contemporary times. It’s an interesting juxtaposition: an old story set in old times, drawn in a visual vocabulary of today. It would be sort of like a slickly-produced primetime drama about life on the Mayflower. Which, actually, would be kind of awesome.