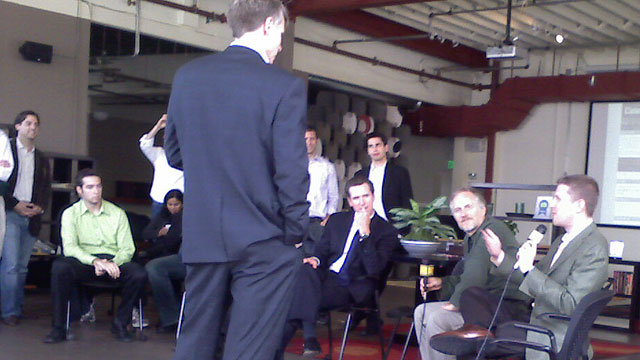 DataSF.org will make any number of public databases significantly more useful to the public once private developers have a chance to play with the bits and bytes of city life, and clearly presents a boon to San Franciscans and others besides. But what I learned from yesterday’s launch of the site is that if you want Mayor Gavin Newsom’s support, you have to frame your argument in an essentially libertarian capitalist way — that is, not in terms of the greatest good for the greatest number, but in the terms of the self-interested entrepreneur who’s at least suspicious of government, if not downright hostile to public institutions.

Because open government advocates such as the pesky Sunshine Ordinance gadflies have been lobbying for this kind of data transparency for years. In a piece titled “Freedom of Information: More sunshine — easily and at no cost,” Kimo Crossman laid out in striking detail a proposal that looks a lot like DataSF. “Imagine filing a complaint with a city agency and tracking the issue, minute by minute, as it works its way through the system,” Crossman wrote — the very image of political accountability and modernity presented by the speakers yesterday. But Crossman wrote that in San Francisco Bay Guardian, which early committed the sin of being critical of Newsom and therefore finds it difficult if not impossible to communicate with the mayor through any channel.

There’s nothing a laissez-faire capitalist loves more than free shit from the public coffersNewsom, who danced deftly near but ultimately around taking complete credit for the open data initiative, explained that his support came after talking to WordPress founder Matt Mullenweg about open source technology for his radio show and podcast [MP3].

Mullenweg, who hosted the press conference at the WordPress office on Pier 38, is a young, affable and ambitious entrepreneur originally from Houston, Texas, and as such is afforded the benefit of doubt which the mayor’s fetishism of businessmen buys — one look at the roster of guests on the mayor’s interview program and the outlets which uncritically publish his press releases (in this case, TechCrunch, but also Daily Kos and the Huffington Post) and the pattern of startup adoration is clear.

Such gifting of city data to those who might monetize it with iPhone apps is “profoundly Republican in its story line,” explained Tim O’Reilly, founder of Sebastopol-based O’Reilly Media. That he said this in all seriousness, wearing cargo pants and an embroidered, Mandarin-collared jacket, did much to explain the essentially neo-conservative appeal to the project which must have finally caught the mayor’s eye.

Because like the land granted to the Leland Stanford’s Central Pacific Railroad, there’s nothing a laissez-faire capitalist loves more than free shit from the public coffers. Mike Linksvayer, Chief Technology Officer for the non-profit Creative Commons, rightly pointed out that all data generated by public authorities is in the public domain, and his colleague noted later that statements of fact are also granted no rights protection under law. But as the city’s Chief Information Officer Chris Vein explained in an interview [MP3], there are costs — both fiscal and political — to implementing that openness in any meaningful way.

In all the talk of iPhones, nobody brought up the issue of how the mayor’s personal iPhone figured largely in the debate over open access to communications between public officialsAnd meaning, in this context, is monetization. While do-gooder projects like EcoFinder and San Francisco CrimeSpotting were touted, there is money to be made serving up ads from Google alongside maps and arrival times for the Municipal Transportation Authority. Tellingly, of the MTA data available on DataSF, the only set provided is formatted specifically for the company’s transit mapping system. And the recent exposure of the MTA’s contract with NextBus Information Systems, which NBIS is arguing grants it exclusive rights to Muni arrival times, haunted the room.

As did the long tussle between public departments and the Sunshine Ordinance. In all the talk of iPhones, nobody brought up the issue of how the mayor’s personal iPhone figured largely in the debate over open access to communications between public officials. Requests for city staff communications with the mayor during the Cosco Busan oil spill were denied, with the matter of their delivery to a personal digital device cited as explanation. And if the sentiment towards the current system of requesting information expressed by Department of Public Works Director Edward Reiskin was any indication, those difficulties won’t change. “It shouldn’t take a Sunshine request from the public to get basic information on their neighborhood,” declared Reiskin.

Never mind that the chances of getting a response to that Sunshine request are slim to none, and when it does come, it will likely be as a closed-format Adobe Acrobat PDF file, having been typed, then printed, and then scanned — rendering it difficult if not useless to data-mining efforts. And when it comes to tactics, Sunshine pests have done little to help their cause. After the meeting, an act of self-parody was the email blast by Sunshine Ordinance advocate Christian Holmer demanding a list of attendees at the discussion, and in an open format. (For the record, of public authorities and officials I counted at least a dozen, with around half a dozen press representatives and the rest developers or entrepreneurs).

“What I’ve been tasked to do is try to figure out how to make that work in a different way, in a more efficient way, and I just, I haven’t been able to figure it out yet,” Vein lamented afterwards. It was hard not to feel for the man, who’s had a techie go rogue on him and is constantly harassed by the likes of Holmer and Crossman. However, what’s missing on all sides of the conflicts in and around City Hall is an understanding that just because some of the behavior in pursuing an issue is objectionable, the basic truth of certain arguments shouldn’t be.

just because some of the behavior in pursuing an issue is objectionable, the basic truth of certain arguments shouldn’t beLove him or hate him, Newsom is right on the issue of marriage equality, and now, thanks to arguments made in the language of entrepreneurialism that he actually understands, he’s right on the issue of open public data — to a degree. There is still much parsing to be done when it comes to which data qualifies, and who benefits. O’Reilly is already planning a CityCamp in January which promises to be a profitable feast all around for developers invited to dine on the public data; Vein took great pains to draw a line between data such as email and “machine readable” data, even though it implies an awkward double standard to which public data is actually made public; and it’s important to remember the issues raised by the recent hacking of the city’s $30 million parking meter system, as well as Google’s experiences in making public information about private people and businesses much, much easier to use.

There to paint the big picture, it’s no less than “a re-visioning of the role of government in our society,” O’Reilly explained, and it will happen “at the local level.” But remember that it’s a picture being painted in broad strokes from the palette of laissez-faire capitalism, a blend of ideological hues harmonic to the eyes of the entrepreneurial beholder but which often clash when taken out into the sunshine.