If Twitter isn’t necessarily a chance to engage directly with critics instead of issuing statements through the press, then what is it for? Newsom argued in a Geek Entertainment Television interview that “for people who want to offer honest criticism or counsel and advice, it’s very meaningful.”

Even activists like Jeremy Pollock with the League of Young Voters rely on online tools. For Pollock, Facebook has become “my default place for keeping tabs on political events and fundraisers,” even though the organization still focuses on providing printed voter guides and more traditional peer to peer political engagement.

And from a campaign standpoint, social media also offers significant opportunities for fund raising. The perceived authenticity of communication over social networks means that unlike traditional online advertising, “click throughs” for social media appeals and recommendations are much higher. And unlike buying ads on search engines like Google, not to mention television, newspaper, billboard or even bumper sticker ads, there is no direct cost. 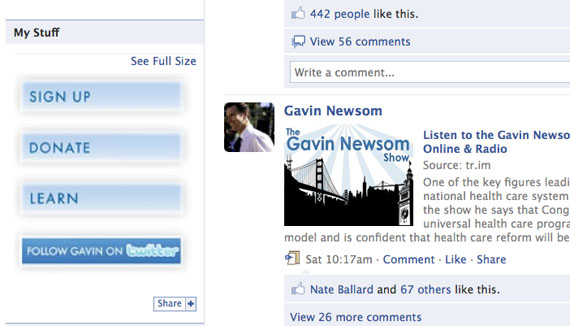 More importantly, unlike offline advertising methods, online methods make it much easier for individuals to go from inspiration to donation. There are no checks to fill out or envelopes to stamp, briefcases full of cash to smuggle or hookers and blow to surreptitiously deliver — while outsider candidates using Paypal to collect contributions have run afoul of local election officials when public financing is sought, privately financed campaigns can use sites like ActBlue to offer the same transaction ease. And subscription donations, like those that netted the Barack Obama campaign so much cash, mean that over the course of a long election supporters on a budget can offer small contributions over time — which can amount to significant money by election day.

The benefit of this is that candidates don’t necessarily have to rely on large institutional donors, at least in theory. But congressional candidate Adriel Hampton only managed to turn 10 of his 2,800 Twitter followers into donors with an appeal shortly after announcing his candidacy. “Unless you really tap into Marko Moulitsas favorites, fundraising is still a phone call operation,” Hampton concluded from the experience.

Newsom has done better, netting a total of $566,995 through ActBlue. A fundraising drive featuring a barrage of Twitter and Facebook status updates on April 31st netted a new record of 282 donations in a single day. Altogether, appeals broadcast online via email, Facebook and Twitter with a link to the Gavin Newsom for Governor account on ActBlue grossed a total of $361,619.74 by the end of April.

With 1,382 donors, that amounts to an average donation of $262.37. But with 338,605 followers on Twitter and 46,955 supporters on Facebook, ActBlue can only claim a conversion rate of 0.3 percent so far — which doesn’t include any “viral” distribution, such as followers and supporters copying, pasting and otherwise relaying a donation appeal link on their own profiles and pages.

Meanwhile, a single day campaign event in Sacramento cost $100,000. And it wasn’t paid for by small donors, but by more traditional sources including AT&T, PG&E, unions and a lobbyists, if filtered through the state chapter of the College Democrats. In the last California gubernatorial election, over $130 million dollars was spent among all the candidates. The half million dollars raised online so far would amount to only one percent of $50 million dollars, which is the kind of money a Democratic primary nominee is likely to raise and spend in order to fight an independently wealthy Republican challenger like billionaire businesswoman Meg Whitman.

And Whitman’s not exactly a technophobe — she previously served as CEO of eBay.

The six-figure Sacramento party was aimed at young people, and for good reason. Newsom has made a point of contrasting his comparative youth against former governor and likely primary opponent, Attorney General Jerry Brown. Yet, while still the mayor of Oakland, it was Brown who was the first to blog — long before Newsom’s missives were featured on Daily Kos or the Huffington Post. Meanwhile, Los Angeles Mayor Antonio Villaraigosa, who has yet to formally throw his hat into the gubernatorial race, has already lobbed a cutting salvo over the bows of both the Newsom and Brown campaigns by declaring that as mayor of LA, he “is not going to Twitter while Rome burns.”

In his recent reelection campaign, Villaraigosa may have deduced that Twitter and Facebook are a great way to reach out to some voters, but not all voters — and certainly not key demographics in a statewide election. Speaking from his own experience organizing local constituents through the League of Young Voters, Jeremy Pollock noted that “the San Francisco Twitter culture seems a little older than the Facebook crowd and more of a techie type crowd than the political crowd.” (It should be noted that the Twitter account which the League of Young Voters maintains was another of those known to be blocked by the Newsom account). 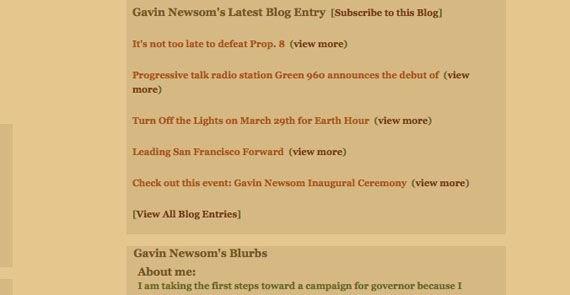 Pollock pointed to a study by San Francisco’s YouthVote [PDF] that revealed Asian-American and “white” (caucasian) students at San Francisco schools were the most likely to use Facebook, while black and latino students were much more likely to use MySpace. Newsom and Villaraigosa both have MySpace profiles, though Newsom’s official Web site doesn’t link to it and neither candidates’ campaigns have updated their MySpace profiles since last year’s national and statewide elections (as of this writing, Newsom’s last login was April 21, three weeks ago). Brown has no obvious MySpace presence at all.

MySpace is owned by News Corp., which hasn’t exactly been friendly to the Democratic party machine. Newsom even caught flack over Twitter from his own cousin after a televised appearance on another News Corp. property, Fox News. But the lack of MySpace engagement signifies campaigns giving up on reaching out to marginal constituents. The choice of Twitter and Facebook over MySpace betrays any stated intent at radical inclusion, since choosing sides in the digital divide belies the crass algebra of class prejudice in online electioneering.

A certain class of constituents with the time to keep themselves interested and informed can now reach out to and interact with each other and their elected representatives as nominal peers, even anonymously (if careful). This surely opens up new avenues of both advocacy and dissent. “It does democratize information so that it’s not filtered by an editor of a newspaper,” said Newsom of Twitter and other online services in his GETV interview.

Does that mean statements presented directly by public officials online are more valuable to the public than excerpts, quotes and paraphrased details as part of a newspaper article or television report? Certainly, they’re invaluable as source documents for citizens, other officials, researchers and historians. But what of the emails, text messages and other private communications between government officials which aren’t published online — will Twitter and Facebook help “democratize” that information as well?

In the next and final installment, we’ll take a look at some of the ethical issues that arise and best practices that have been proposed for public servants who’ve turned to private Web sites and services for communication.