Loiterer About Town: Tom Jones at the Warfield 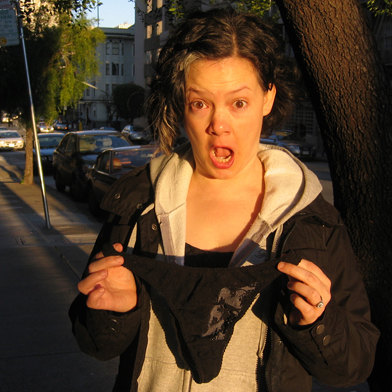 The minute I booked my Tom Jones tickets, I started worrying about panties. Should I bring them? Is it gross? If I do bring them, what kind? I had always secretly wanted to chuck panties at a singer and, luckily, I had already determined a couple of years ago, that it was in fact Tom Jones at whom one threw their panties, not Wayne Newton. That would have embarrassing, since we were at Wayne Newton’s Christmas show and he had his 5 year old daughter on stage. So this was going to be my chance.

I wanted to bring the biggest nude colored polyester granny panties I could find, so I could watch them sail through the air and settle on Tom, covering the whole top half of his body, as he sang What’s New Pussy Cat. Unfortunately I immediately forgot about the whole thing and ended up scrounging through my underwear drawer as I was hurrying to the concert.

Earlier I had been on the fence about bringing the undies, so I asked my husband if he thought I should. He said “Yes. Because you’re wearing pants, so if you go there without extra ones and the spirit moves you to throw some, you’d have to take your pants off in front of a crowd of people.” I was insulted that he’d think I’d stoop to that level but he did have a point.

Unfortunately I don’t have any granny panties. Don’t get me wrong, I have plenty of worn out old cotton ones but throwing a pair, where the cotton has worn away to show the elastic inside the waist band, on stage at a public event seems like it would reflect badly on me. So I picked out a lacy thong that I had never worn because I bought it too small, it also fit well in my pocket.

Then I thought I should have a picture of this momentous event. My husband came out into the hall to take the picture while I waited for the elevator. Just as he’s about to snap the photo, the elevator door opened, so I stuffed them in my pocket. The man in the elevator looked at us, paranoid, and asked what all the commotion was about. I told him that I was going to a Tom Jones concert and wanted a picture of the “accoutrement” one brings to such an event.

I might as well have screamed “VAGINA!” in his face from the reaction I got. He wouldn’t even look in our direction after that. We ended up getting the picture out on the sidewalk. For some reason it seemed less weird to take pictures holding underwear, outside on a sunny sidewalk.

I was so excited about my impending underwear throw that I was showing them to everyone, the waitress at dinner before the concert, the ticket taker, even the cocktail lady serving our table. Every single one of them looked at the undies with a bored expression and said “yeah, I’ve seen a lot of those.”

Tom came on stage. His voice was still great and he was way hotter than a man his age should be. But I pretty much missed the first half of the show stressing over when would be the best time to throw the panties. Soon other people started throwing them. They were little and caught the light as they floated like butterflies towards him, a black butterfly then a white one then a lacy one, all landing softly on his stage.

I felt it was time, and he started singing a song that no one seemed overly excited about, so I decided to head to the stage. I pulled out the panties and held them dangling out in front of me, my arm outstretched. To make it through the crowd I repeated “Panties coming through”. This was a very effective technique, even the bouncer watching the floor made way. But then I got half way through the pit and things changed.

Women started grabbing me and throwing my whole body backwards into the crowd. I was shocked. All I was trying to do was throw my panties. It’d take a couple seconds up to the stage and then I’d leave. But these woman were of a whole different mindset than I was. I was just trying to have fun but they were hell bent on violence, mainly against me.

I was more concerned about the panties making it to the stage than about who threw them so I suggested if they weren’t going to let me get close enough, perhaps they’d like to throw the panties. Not a chance. There was going to be no friendly cooperation. They kept screaming at me and pushing me back, it was getting dangerous and I knew I had to get away from these hostile dorks quick, so I cocked my arm back and used everything I knew about throwing a football to launch those suckers into the air.

They stayed in a ball long enough to make it over most of the crowd, then they spread their wings and started to slow down. I wondered if the woman whose head they were going to land on was going to try to kill me. Then they caught a slight upward draft and landed just at Tom’s left foot. The woman behind me high-fived me but, while I did appreciate her support, I really didn’t care anymore.

The rest of the concert was ruined for me because I was so stung by how the people in the pit had acted. How could I have missed the fact that throwing one’s underwear at somebody is a act of desperation? I may well have been the only one down there throwing my underwear as a joke. Those people were serious.

And if they were actually serious, I had to wonder what they thought throwing their underwear was going to get them? Tom totally ignored the undies, he’s probably seen so many panties flying at him that he doesn’t even notice them anymore. Did they expect him to scoop them up like a bouquet? Say he did take a particular liking to one pair over all the others, how would he know who’s they were? Could there actually be enough room to scrawl one’s contact information on a pair of panties that sexy?

That kind of fantasy makes me nervous and for the rest of the night I kept imagining those desperate people stumbling, half drunk and alone, into their tiny, dark studio apartments, as their underwear is swept into a garbage can, on top of all the beer soaked napkins and nacho remnants. Not mine though, they’re probably in Tom’s pocket right now.

On her way to finding answers to your questions, Babe sees and hears a lot. Loiterer tells some of these stories, but she’s just one loiterer in a city of thousands — send your overheards and pocket-sized anecdotes her way.